Yellow socks Softball Challenge – the game has been played and won!

Video uploaded on Youtube, check it out by clicking here

We are very grateful to the Cage Breakfast Show who interviewed Gorden Tallis on Friday mornings show, promoting the game – click below to hear what The Cage and Gorden had to say, pre-event!

Play for a cure Auction Promotion on The Cage

The inaugural Yellow Socks Softball Challenge has come and gone and there is only one way to describe the day.

The rains held off all morning, allowing the wonderful volunteer workers of the Brisbane Softball Association to prepare the International softball diamond to be in top notch condition.

The players, both the Broncos and Aussie Softball All-stars, started arriving around 10.30am and unfortunately so did the rains. The organising committee’s worst nightmares were being realised! With all players gathered, the contingency plan was being discussed however luckily for the crowds that had been gathering since 9am, and for the organising committee, the players all voted to PLAY BALL.

After a brief warm up the formalities were underway with Emcee Kim Cooper warming up the crowd and then handing over the microphone to Gordon Cunningham, BSA President, who welcomed our guests and the gathering crowds. Touching speeches were made by Tyleisha Dunn and Graham McColm about their loved ones, who passed late last year. Roving mike lady, Stephanie Gill then called Gorden Tallis and softball legend Joyce Lester to the home plate to toss the coin and ask them their game plans. As you can imagine, the responses were amusing!

Then what everybody was waiting for – it was game on! The rain continued but the skills on display were awesome and it has to be said that the Broncos were naturals and in fact, revelled in the rain. It would seem the more it rained, the more the boys enjoyed it. The game started with a huge home run over left field fence by Australian Softball Captain Stacey Porter and that hit set the scene for the entire game. There were lots of hits, lots of sliding but most of all lots of fun being had by the players and the crowds. Stephanie kept the players in contact with the crowd with her impromptu interviews which had everybody laughing and getting an insight in to what the players were thinking. It may have been raining, some would say cats and dogs, but the interaction with the players and their game play kept the crowd enthralled, and most importantly, kept them there!

The game was scheduled to run for one hour, but as the players were having so much fun, it went overtime and this allowed the Broncos to shoot ahead in their last innings with several long home run hits. Unofficially the Broncos scored a win – 18 to 12. It must be noted that the pitching became kinder as the rains and the home run hits increased!

After the game was completed, Stacey and Australian Rugby League Captain, Darren Lockyer, were present to draw the winning tickets in the raffle prizes. Thanks to the Qld Softball Heat for selling the tickets and walking the donation buckets around the grounds. 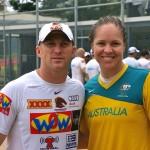 There were plenty of winners on the day with all prizes claimed. 2 were donated back to the organising committee which we are very grateful for, everybody was so generous on the day.

But the big winner on the day was the game of softball. With plenty of people in the crowd not having ever watched a game before, it is safe to say that they will talk about softball and the spirit of how it was played for days and weeks to come.

Needless to say the day could not have happened without the work of so many volunteers so now we would like to take the time to thank them.

Sincere thanks go to: –

• Jason Greenhalgh, Major League Corporate Marketing, for volunteering your time and marketing expertise! Jason you made things so much easier to do!

• Brisbane Softball Association – President Gordon Cunningham, Sue Sanders, Anne Brock, Dave Trotman, Mark Willingham, Alana Cutmore, Karen and Peter Elliot, Mick Gregory – thank you for allowing us to use Downey Park to stage the event and for your patience and understanding during our meetings. Also for your work done in getting the event happening. You are amazing!

• All the sponsors that donated their time and/or money – our eternal thanks!

• The numerous volunteers from the Clubs who participate at Downey Park each weekend, there are so many of you we couldn’t list you all. You know who you are and you too have our thanks. Its people like you who enable events like this to occur.

• The game umpires! Ron Trow, Helen Strauss and Ian Goodman – thanks for standing in the rain and umpiring the game in the spirit it was played. We know you enjoyed it as much as the players.

• The spectators who turned up, even with the weather as foul as it was. You came, you stayed and we are very happy to know that you had a great day!

• The Brisbane Broncos! Ivan Henjak, what a sport for allowing your team to join in! Darren Lockyer, Gorden Tallis, Allan Langer, Corey Parker, Ben Hannant, Jharal Yow Yeh, Josh Hoffman, Matt Gillett, Dale Copley and Josh McGuire – thank you guys – we know you have lots of demands on your time. We can’t thank you enough for playing! Tyleisha Dunn, ok you are not a Brisbane Bronco but you did yourself proud pitching them to a win!

• The Aussie Softball All-stars! Thank you ladies, even though some of you have been retired for many years – you still have it! Stacey Porter, Joyce Lester, Tanya Harding, Melanie Roche, Brooke Wilkins, Tracey Mosley, Frankie McRae,Haylea Petrie, Marissa Warburton, Kelly McKellar-Nathan and Jodie Bowering.

• Personally I would like to thank my fellow Director Kelli Oates, for coming down from Rockhampton and being my goffer.  P4AC Team Players, Sueann Yates, Tara Speakman and Sherridan Darroch for braving the rain and manning the P4AC stall all day.  Thank you ladies, you made my job on the day so much easier!

Our wish now is that we can conduct the event next year – bigger and better!

Below are the photos from the day, as well as our sponsor’s logos (with links to their websites).

Queensland Origin Stars – Past and Present

We are so excited to feature our latest auction.  With State of Origin reaching fever pitch, and it all coming ...

In our 5th year at Softball Queensland Masters, we are hoping to crack the $20000 raised mark at this tournament ...